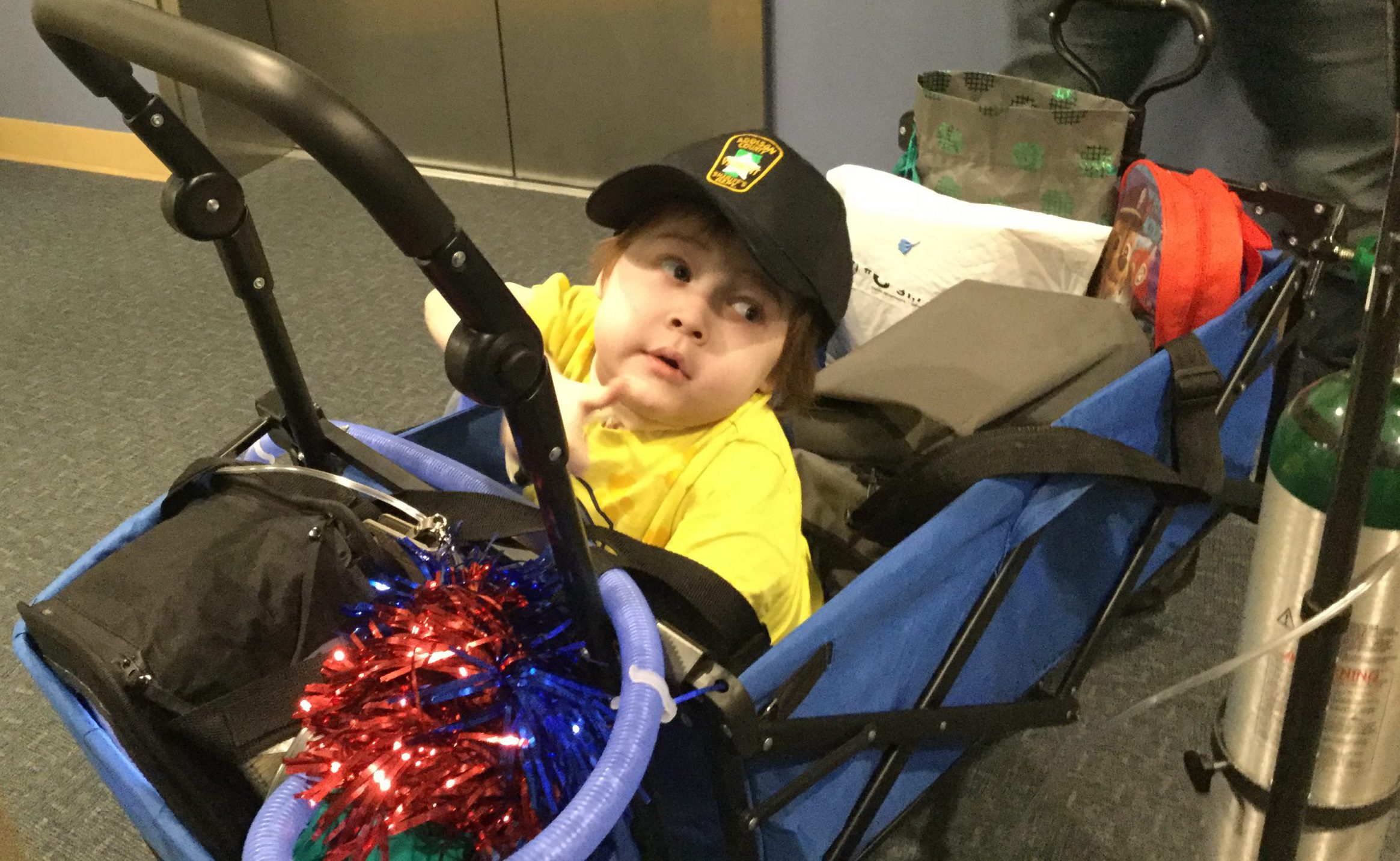 The highlight of Dr. Nhat Pham’s Monday was receiving a sticker from a 5-year-old cystic fibrosis patient, Noah Schneider. Of course, another highlight was that Noah was going home that day after spending 60 days in the hospital and nearly losing his battle with the coronavirus.

Noah was all smiles and gave dozens of thumbs-up as the staff at the Sutter Medical Center Children’s Center cheered him on when he left his pediatric ICU room of two months being pulled in a wagon by his parents, Haley and Andrew Schneider of Yuba City, Calif. 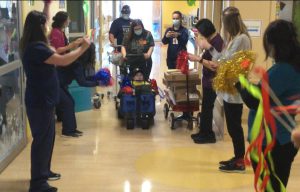 Sutter Medical Center Children’s Center staff cheer on Noah Schneider as he leaves his hospital room after a two-month fight with COVID-19.

The fanfare included two-dozen staff — specially trained pediatric nurses, respiratory therapists, pharmacists, Child Life specialists and even full-time facility dogs — who cheered and waved colorful pom poms and signs as they said farewell to a boy who not only brightened their lives, but hundreds around the world.

“It’s very rewarding to see a patient come in so sick and be able to leave the unit happy and smiling, interacting with you, and having no signs of the severe complications that Noah had,” said Dr. Pham, a pediatric critical-care physician at the Sacramento children’s hospital. “He had a very rough hospital course, to the point that we were concerned that Noah wouldn’t make it, but he pulled through the process. It’s so exciting and I’m happy to see him leave us smiling.”

Not only smiling, but Noah was also concerned about a couple dozen presents – most in Priority mailers – being pulled in another wagon as he was being wheeled through the hospital to the family vehicle. Noah wanted to keep an eye on them all the way.

Those packages are very special, containing presents that were ordered online and sent to Noah’s hospital room from people around the world who were touched by Noah’s fight for his life and a simple plea for stickers. They were just the latest packages to arrive for Noah. 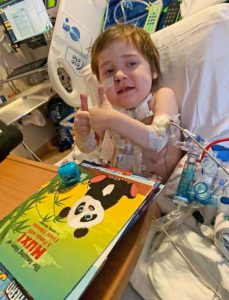 Noah shows his appreciation for the many gifts and especially the cards he’s received while at the Sutter Medical Center, Sacramento Children’s Center.

In February, after Noah survived his toughest stretch in the hospital, his mother, Haley, reached out to the Sacramento ABC affiliate to have people send stickers to Noah to brighten his life. The request turned into a story on “Good Morning America’s” website.

The next day, packages began arriving at the hospital for Noah: toys, blankets, slippers and socks, ordered on Amazon and shipped directly to Sutter Medical Center; handwritten cards from around the world, many from other children with cystic fibrosis; and, of course, sheet after sheet of stickers.

By the time Noah left the hospital, he had received 2,500 Amazon packages and 500 cards with stickers in them. Many of the gifts – stuffed animals, books and other items – have since been donated by the family to the Child Life program, which helps to brighten the lives of pediatric patients in the children’s hospital.

“I’m overwhelmed with thankfulness,” Haley says. “This gives me hope for the world. This is just one little story, but look at the outpouring of response. People have a lot of kindness in their hearts.”

Meanwhile, the glut of stickers has allowed Noah to be very generous to the many hospital staff who have cared for him.

“Noah is always smiling, always giving a thumbs up, always handing out the stickers he gets,” Haley says. “He’s a little sassy, but he likes to share. And he steals everyone’s heart.”

But, for a month after being admitted to the hospital with COVID-19, little Noah was not a happy camper. In fact, during the month of January, Schneider said, Noah needed to be sedated so he wouldn’t fight the ventilator he was on. 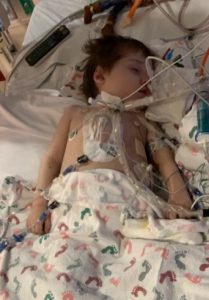 Noah was very sick as he fought for his life in January.

“One Friday we had a meeting and they said that they didn’t know which way Noah would go, if he would make it. Then the next Friday, they said, ‘Well, this was easy,’ because he just turned around in a week. So, it was a miracle,” Haley said, fighting back tears.

Cystic fibrosis is an inherited, life-threatening disease that damages the lungs, digestive system and other organs. Combine the disease with COVID and you have a deadly situation, said Dr. Pham.

“His lungs were already at-risk for significant injury and were already sick at baseline, and then toss on severe life-threatening COVID pneumonia, which is what he had, and that’s why he got very, very sick,” Dr. Pham said. “So it was not good for Noah by any means.”

It Takes a Village of Clinicians

Dr. Pham credits Noah’s recovery to the entire team of specialists, nurses, respiratory therapists, pharmacist and others who cared for him.

“We all put our heads together and did anything we could think of to get him through,” Dr. Pham said. 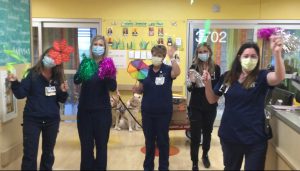 Some of the care team for Noah wave pom poms as he is discharged from the hospital.

As a group, he said, the team selflessly put risks of COVID infection aside and did whatever needed to be done to avoid having to put Noah on full heart and lung support, the last hope to save his life.

“Rather than ‘running from a burning building,’ ” he said, “everyone charged in every day to provide Noah with the care he needed.”

The critical-care physicians, led by primary intensivist Dan Falco, M.D., who is also the co-medical director of the Sutter Children’s Center, consistently provided bedside bronchoscopies to remove secretions and mucous plugs to help Noah’s lungs to recover. His bedside nurses stayed in the room 24/7 in PAPR suits to ensure he received constant, consistent care; his respiratory therapists went in multiple times to provide treatments, suction his airway and change ventilator settings; and the PICU pharmacists even went above and beyond, researching therapies and coming up with ideas to optimize his care, Dr. Pham said.

Leaving One Family, Seeing Another

The extra effort did not go unnoticed by the Schneiders.

“We’re so thankful for everything everybody did here,” Haley said. “They fought for Noah and never gave up.” 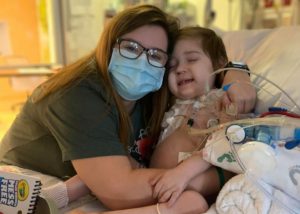 Haley Schneider hugs Noah in the hospital. On March 1, Noah was reunited with the rest of his family.

She said that, even if a nurse or doctor wasn’t assigned to care for Noah on any given day, they would stop by to make sure everything was going well with Noah and his parents.

Meanwhile, Noah was excited to be going home on Monday to see the rest of his family – two siblings, two dogs and aunties – whom he hadn’t seen for two months due to visitor restrictions. But Haley admitted that they would miss the staff at the Children’s Center who cared for them during the past two months.

“It’s like a big family here,” Schneider said, “and that’s what means the most to us.”