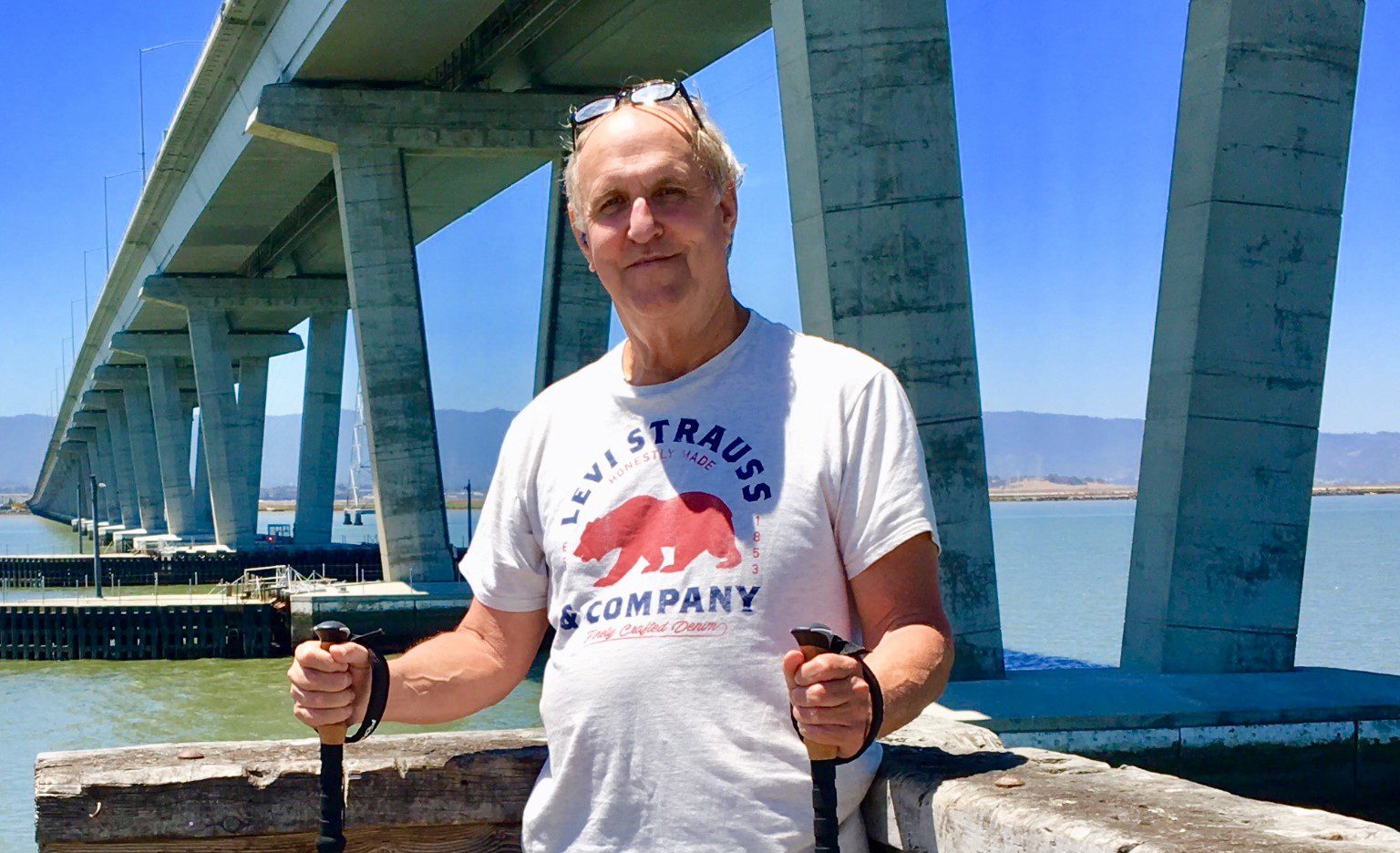 Bob Murphy, 68, uses walking poles to aid his stroll over the Bay Area’s Dumbarton Bridge. When he first began a battle with stage 4 lung cancer in 2016. the 2-mile walk aided by his wife was peppered with rest stops every 50 yards. Now Murphy walks the bridge with greater ease and energy, thanks to the renewed health afforded by a game-changing clinical trial that may have contributed to his remission.

“A persistent cough was the first sign that something was wrong,” says Murphy, who was working as a plumber in Redwood City when first diagnosed with lung cancer. A chest X-ray and CT scan at Palo Alto Medical Foundation’s Fremont Center revealed a fist-sized tumor in his lower left lung.

“Never did I imagine so badly wanting my ‘old life’ back,” says Murphy, who received platinum-based chemotherapy and radiation to treat the lung tumor and cancerous cells that had spread to his lymph nodes.

But the side effects from chemotherapy left him bed-ridden for a year. Murphy and his wife began researching other treatment options and were intrigued after reading results of clinical trials testing new drugs called immunotherapies to treat patients with lung cancer and other types of cancer.

Lung cancer is the leading cause of cancer-related deaths in the United States. Immunotherapies are designed to “target” the genetic aberrations present in a subset of cancers in people with the disease, compared with standard, first-line therapies like chemotherapy or radiation.

After consulting with his oncologist at PAMF, Bryant Sheh, M.D., Murphy qualified for participation in a clinical trial called Lung-MAP being offered through PAMF’s research institute. November 2017 marked Murphy’s first treatment on the clinical trial, in which he began receiving infusions of two immunotherapy drugs called ipilimumab and nivolumab every two weeks.

Sponsored by the National Cancer Institute’s NCTN Southwest Oncology Group and launched in 2015, Lung-MAP previously tested treatments for people with advanced-stage squamous cell lung cancer. Lung-MAP is now open to patients with all types of advanced, non-small cell lung cancers. This means that thousands of additional patients may be eligible to enroll in this landmark study and potentially benefit from investigational drugs to fight their cancer.

Lung-MAP has already yielded important information about treatments potentially suited to patients whose options for medical therapy may be limited.

“After the first couple infusions of the immunotherapy drugs, I felt an incredible difference in energy and lung capacity,” Murphy says. His improvement was reflected in the CT scans: After five months on the Lung-MAP clinical trial, Murphy’s tumor had shrunk by approximately 40% compared with its size before treatment. The pleural effusion surrounding his left lung (akin to a bag of water) also deflated dramatically.

Now in remission, Murphy sees his oncologist for check-ups every two weeks and continues to receive immunotherapy twice monthly.

“I was committed to fight this disease and explore every option for treatment,” Murphy says. “Clinical research provided me the chance to be proactive in my journey with cancer and to walk toward health again. I wish the same opportunities for other people with this disease.”

“At Sutter we take pride in offering evidence-based, innovative and personalized therapies for our patients,” Dr. Sheh said. “We are proud to have participated in many pivotal trials that have redefined standards of care.”

Lea Ann Bernick, director of the Sutter Cancer Research Consortium, knows well the importance of this personalized approach to cancer care. Through her efforts and in collaboration with Sutter clinicians like Dr. Sheh, Sutter has enrolled 50 patients to Lung-MAP in the past two years, an achievement that positions Sutter among the top enrollers to the study nationwide.

“Participation in clinical trials allows us to offer our patients, right where they live, otherwise unavailable advances in treatment options and evaluate the latest insights from medical science,” says Bernick.