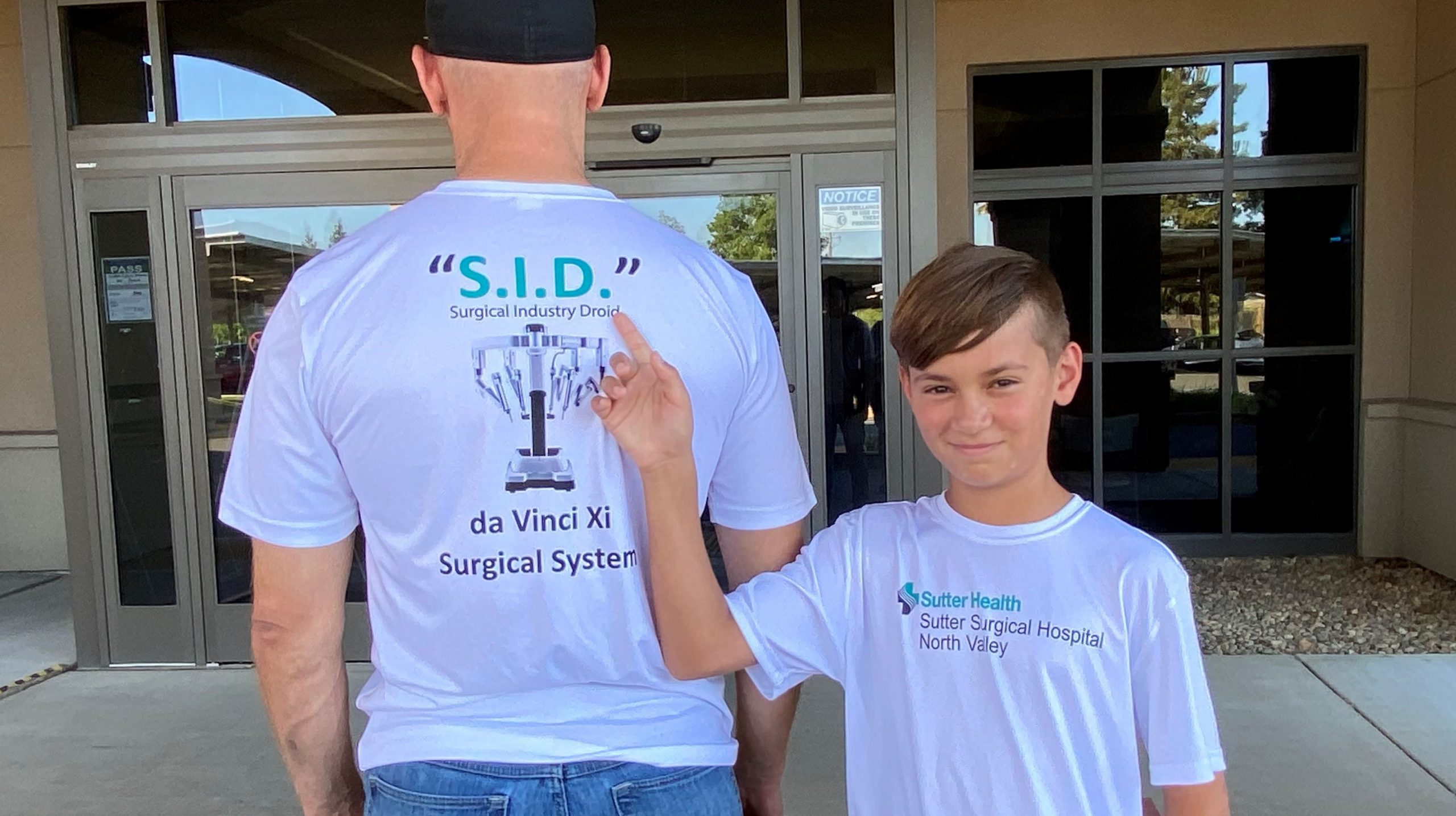 William Bramhill, 11, likes to wrestle and named his practice wrestling dummy T.O.D. “T.O.D. means ‘The Other Dude,’ like, ‘You should have seen The Other Dude,’ “ he explains.

So, when Sutter Surgical Hospital in Yuba City held a contest at schools throughout the Yuba-Sutter area to name its newest surgical robot, T.O.D. gave William the inspiration for the name of the latest next-gen medical technology at the hospital. 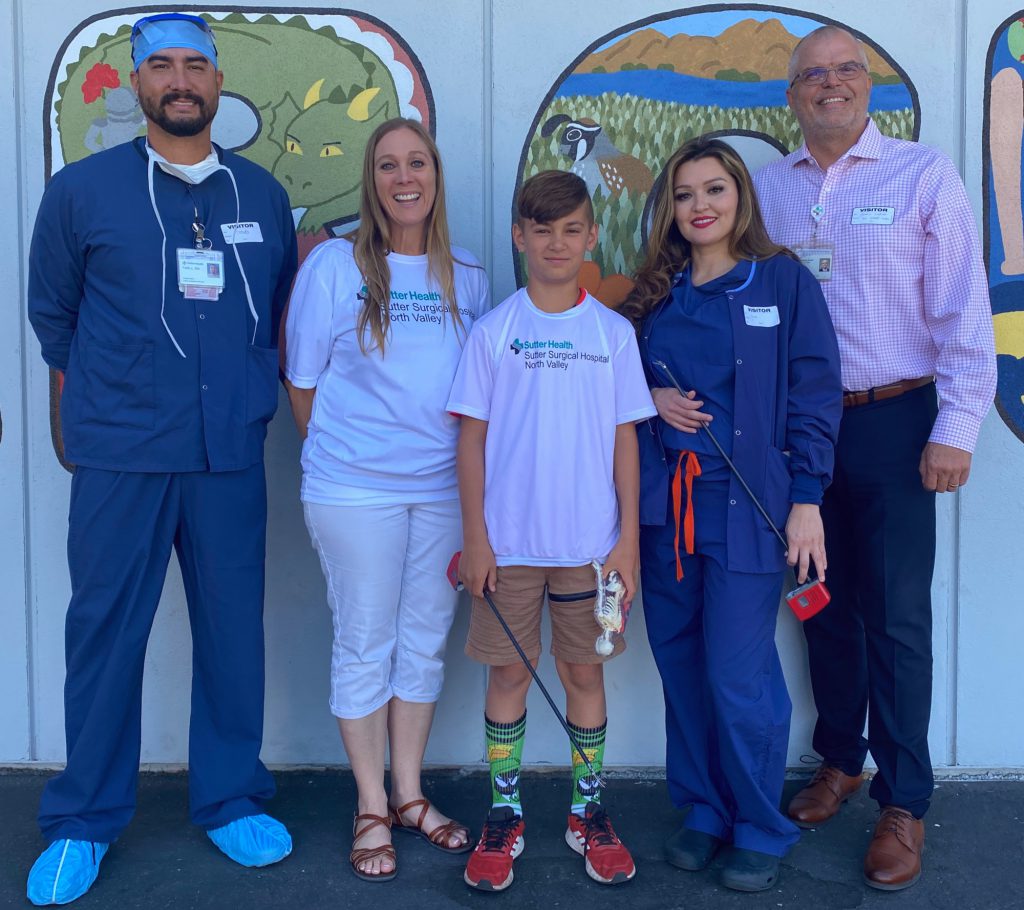 William Bramhill, center, holds one of the da Vinci’s “arms” during a celebration and demonstration at his school With him are, from left, registered nurse Todd James, his teacher Robin Kyle, surgical technician Yuri Tochi, and Sutter Surgical Hospital North Valley CAO Dennis Sindelar.

“Going up against so many other students, I knew I had to come up with something clever,” William says.

So he combined his wrestling dummy’s creative name with his love of “Star Wars” and Marvel superhero movies. The name? S.I.D., for Surgical Industry Droid.

Out of 90 submissions from students at more than a dozen schools, the Sutter Surgical Hospital North Valley staff voted and recently christened their da Vinci XI surgical robot S.I.D.

The Sutter Surgical Hospital’s team visited William’s fifth-grade class at Marcum-Illinois Elementary School recently to celebrate the winning name and demonstrate how the da Vinci XI Surgical System® works and how it will assist their surgeons. Then, on May 15, William got to meet the robot for the first time and was surprised how big it is, standing more than 6 feet tall.

“I really didn’t think about a career as a doctor before,” William said, “but after I got to see how the robot works, I think it’s super-cool.”

The da Vinci XI is the first and only surgical robot of its kind in the Yuba-Sutter region. It is assisting surgeons at Sutter Surgical Hospital perform their complicated surgeries with more precision. And, because the surgeries are minimally invasive, with patients recuperating quicker and returning faster to their normal activities.

Until recently, many conditions required traditional, large-cut surgery, or through laparoscopy that limited the surgeons’ mobility and view. Sutter Health has invested in the latest precision technology — the da Vinci® Surgical System — which offers a minimally invasive option that can greatly reduce your hospital stay and recovery time. 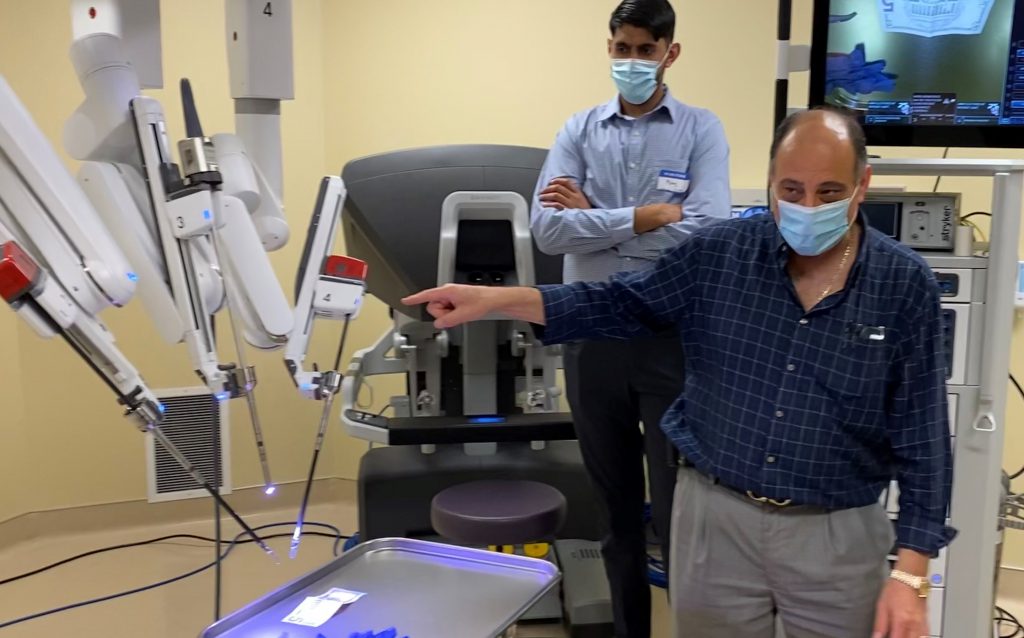 Dr. Ekdawy, right, shows the da Vinci robot and explains how he will use a special control center to fold a $5 bill.

“Da Vinci is an extension of laparoscopy,” said Dr. Ekdawy, who is performing such procedures as gall bladder, hernia and appendix surgeries with the da Vinci. “We went from open surgery where you make a big incision in the abdomen and do the surgery with your hands, to laparoscopy, where you make small holes and you put long, straight, stiff tools inside the abdomen and you work there. Da Vinci gets you to the next level, where you have 3-D vision and a wristed instrument. So, instead of trying to work with chopsticks and they don’t bend, the instruments in the da Vinci are wristed like the human wrist, so I have better mobility as well as better visualization.”

Benefits of the da Vinci robotic system include:

S.I.D. Has a Robot Friend at Surgical Hospital 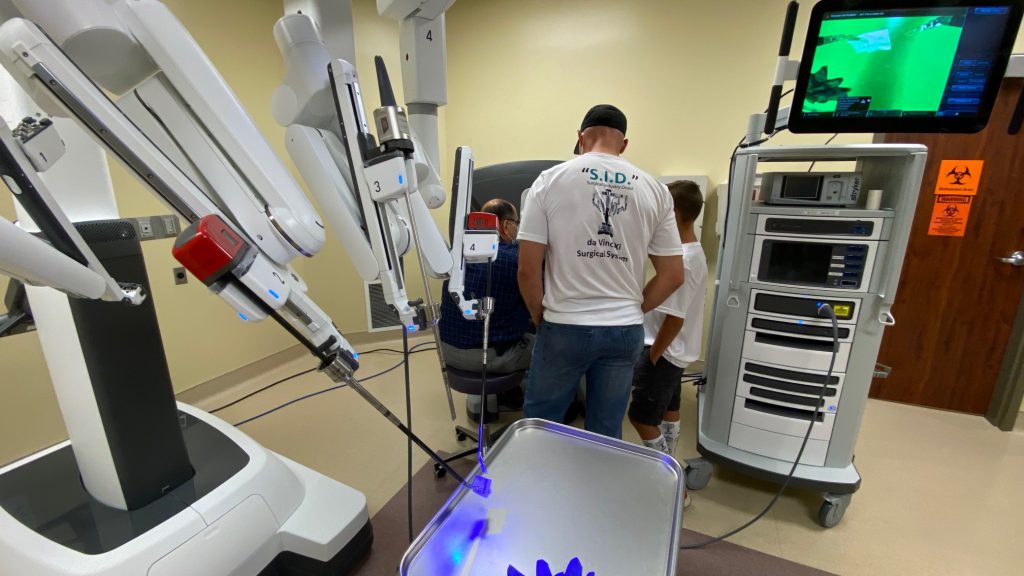 Dr. Ekdawy shows William and his father, Brian Bramhill, how he uses the control center to have the da Vinci robot fold a $5 bill. (Click on the photo to expand it and look at the bill being folded in the bottom center and on the monitor in the upper right.)

“We are extremely pleased to be able to offer patients here in the Yuba-Sutter area this incredible technology that provides so many advantages to both our patients and our surgeons,” says Dennis Sindelar, regional director of Sutter Surgery Center Division.

“The robot doesn’t actually perform surgery,” Sindelar continues. “Your surgeon is still controlling the robot. But the system enhances the surgeon’s skill and precision, which can result in less pain and a shorter recovery time.”