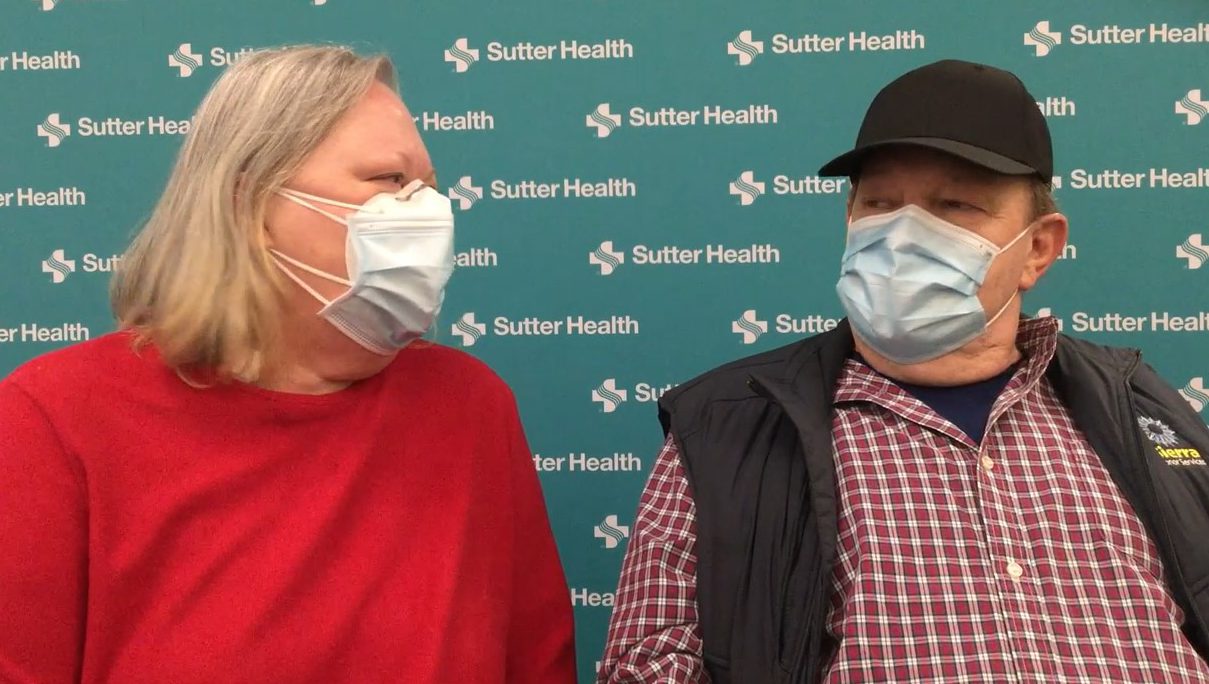 Jim and Kaye Donovan have been married for 17 years, and over that time their love has grown immensely. So did their hearts.

In fact, their hearts grew so much that they were each about three times the size of a normal heart. 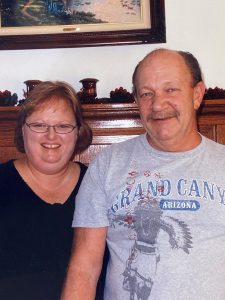 Kaye and Jim Donovan both developed cardiomyopathy and had the largest hearts their cardiologist had ever seen.

“They both literally had the biggest hearts of two people I’ve ever known,” said John Chin, medical director of the heart transplant program at Sutter Medical Center, Sacramento.

In his 30 years of treating patients with complex heart diseases, Dr. Chin has never heard of a married couple both needing heart transplants. The Donovans are the first.

Jim received his new heart three years ago, and Kaye was transplanted in December 2020. Both at Sutter Medical Center, Sacramento, the only heart transplant program in Northern California outside of the Bay Area. Both transplanted by the same surgeon, Robert Kincade, M.D. And both were 62 years old at the time of surgery.

“It’s just amazing because of the coincidences,” Dr. Chin said. “We have had other family members that we’ve taken care of; that’s called familial cardiomyopathy, where patients genetically inherit weakness to the heart muscle. Sometimes they have multiple family members affected. But never a husband and wife team.”

The couple have known each other for nearly three decades and have been married since Christmas Eve 2003. At that time, doctors knew that Kaye’s heart was enlarged, but her health wasn’t a problem.

“All my doctors would tell me, ‘You’re so sick on paper, but you don’t look that sick,’ ” Kaye said. “I did really good with the meds and cardio rehab and just basically being compliant with everything they told me to do to stay healthy.” 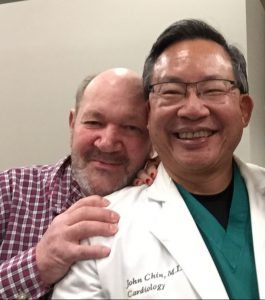 Jim Donovan with Dr. John Chin, the heart transplant programs’ medical director. In his 30 years with the program, Dr. Chin has never heard of a married couple both receiving new hearts.

A few years later, though, Jim started having issues with his ticker spurred by what’s called Valley Fever, a fungal infection found in the soil in the Bakersfield area where they lived. They moved to the Chico area, where the air is better, and both were then referred to Sutter’s advanced heart therapies program.

Both Jim and Kaye had cardiomyopathy, wherein the heart’s ability to pump blood is decreased because the heart is enlarged, dilated and weak. Cardiomyopathy is a major cause of heart failure and often leads to heart transplantation.

“When the heart gets weaker, it remodels and gets bigger to try to be able to pump enough blood,” Dr. Chin said. “He had a heart attack that weakened his heart and it eventually got to the point that his heart needed to be supported by a mechanical pump called an LVAD.”

An LVAD – a left ventricular assist device – is often called a “bridge to transplant.” It is implanted in the heart and is powered by a battery worn on a belt or pack. It assists the heart in pumping blood through the chambers and helps patients get strong enough for a new heart.

“At the time, Jim wasn’t a candidate for a transplant,” says Dr. Kincade, who heads the advanced heart therapies surgical program that includes LVADs. “Once we implanted the LVAD and he was able to add some lifestyle modifications, we were able to get him on the transplant list and got him a new heart.”

For Jim, the heart came from a San Francisco firefighter. Jim met the man’s family and his fire department crew in an emotional ceremony during which he was able to thank them for saving his life. The firefighter was 47 years old, so the heart is 15 years younger than Jim is.

During those years when Jim had the LVAD and then the new heart, Kaye was his primary caregiver at home. This included the 90-minute drives from the Oroville area to Sutter Medical Center for monthly and sometimes even weekly appointments.

“Her heart was actually bigger than his at the time of his transplant, but she was clinically doing well,” Dr. Chin said. “Maybe she was hanging in there for her husband. … She was there for him when he was sick, and shortly she ended up getting worse and eventually had a heart transplant as well.”

Heart surgeon Robert Kincade, M.D., left, transplanted the hearts of both Jim and Kaye. Here he is with Jim after getting his LVAD in 2015.

The fires in the past couple of years took their toll on Kaye. She was having trouble breathing and thought that once the smoke cleared, she’d be able to breathe normally again. But that didn’t happen.

“This is what my doctor told me 20 years ago,” Kaye said. “He said, ‘You’re not gonna always feel this great. Eventually we’re gonna have to do something.’ ”

That something, it appeared, was going to be an LVAD until an appropriate heart was found. Because Kaye was otherwise in good health, she qualified right away to be on the heart transplant list.

“When she was deteriorating, we were talking to her about needing a heart pump if we didn’t get a heart in time,” Dr. Chin said, “but fortunately we were able to get the heart.”

Kaye has written a card to the family of her organ donor, but that person will remain anonymous unless and until the family responds. She would love to tell the family how grateful she is for their loved one’s gift of life.

“I would really like to thank them in person. I thank them a hundred times a day, my donor,” Kaye said, fighting back the tears. “I can hear my heart in the nighttime, it’s just so strong. And, you know, I think they might’ve had a love of music because, I always liked music, but now I really love music.”

A Second Chance for Lovebirds

Kaye now says she feels 20 years younger, and the couple are both thankful for what they call a second chance at life.

“It’s so nice that we both have energy again. We cook together, we clean together,” said Kaye.

Jim and Kaye plan to make a trip to where it all began — their wedding spot in 2003 — when it is safe for them to travel.

Jim added that they have a feeling of “really being thankful when you wake up and you can do things that you couldn’t do before, like climbing up the stairs. They used to take her out practically, and me the same way. But now we can do the stairs and go for a walk on the Oroville Dam.”

They also now are on the same regimen in order to take care of themselves and their new hearts.

“We’re going down the same road now,” Kaye says. “In fact, he takes the same pills practically at the same time as I do. We have the same little problems, the same little things that happen when you get a heart transplant.”

Soon, after the pandemic has passed, they have a goal to visit a place that’s special to them: Hawaii. That’s where they were married.

Dr. Chin has seen the couple grow closer as they’ve cared for each other, and he says they’ve been an inspiration to other patients and have agreed to assist in clinical trials.

“The love and support they’ve shown each other is incredible,” Dr. Chin said. “Now, fortunately, they no longer literally have the biggest hearts, but they do figuratively still have giant hearts.”