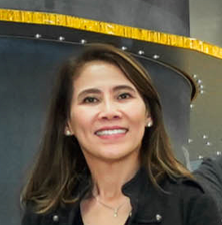 Diane Nguyen has always loved to swim. As a child growing up in Vietnam in the 1970s, she swam regularly at a local pool, but she also suffered from painful ear infections that damaged her hearing. By middle school, her hearing in her right ear was gone and she was starting to lose hearing on her left side, too.

“At that time, in the midst of a war, there was very little access to healthcare in Vietnam,” Nguyen recalls.

At the hospital where she was taken with a severe ear infection, she was terrified by the sight of other patients with disfigured jaws and head bandages who had undergone surgeries similar to the one proposed to her.

Afraid of a similar outcome, “I decided I’d rather be deaf than have my face disfigured,” she says.

Not long after, Nguyen’s family, including her 10 brothers and sisters, immigrated to the United States and settled in the Silicon Valley, sponsored by an older brother who served in the military, allied with the U.S. Navy.

As the years went on, Nguyen learned to compensate for hearing out of just one ear. She raised two boys and built a career in mechanical design for semiconductor companies and defense contractors.

Nguyen also made several visits to ear, nose and throat specialists to patch perforations in her left ear in an effort to keep it functioning. These surgeries were largely successful, and she was grateful for the positive outcomes, however, several surgeries to repair her right ear, the one with total hearing loss, were unsuccessful. 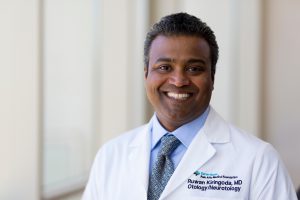 “Diane’s previous surgeries to patch perforations didn’t restore sound because of another underlying problem in her inner ear,” he explains. “Under close inspection with a high-powered microscope, I was able to see a hairline fracture in one of the three ear bones that make up the ossicular chain.”

To restore hearing in her right ear, Dr. Kiringoda balanced a 2-millimeter titanium “bridge” to reconstruct the integrity of the ossicular chain with exact placement, allowing sound to transmit from one bone to the other. Two years later, he found the same inner-ear problem in Nguyen’s left ear and made a similar repair.

“I hear in stereo now!” Nguyen says. “I can hear a plane fly from left to right when I watch a movie, and I can hear sirens behind me when I’m driving. I used to feel isolated and often couldn’t communicate with people. It is amazing to be able to hear after so many years.”

“Diane had been through so many issues with her hearing, so it is powerful for me to know that she could trust me to overcome her hesitancy to consider more surgery, Dr. Kiringoda says. “And then seeing her do so well and enjoying life is really the reason I became a doctor.”

Today, Nguyen cherishes her ability to hang out with friends, dance, hike and enjoy all sorts of outdoor activities without hearing aids. She is also eager to swim again.

“I am so thankful,” Nguyen says. “I had avoided many situations, but now I look forward to enjoying a meaningful life. Dr. Kiringoda gave me my confidence back.”