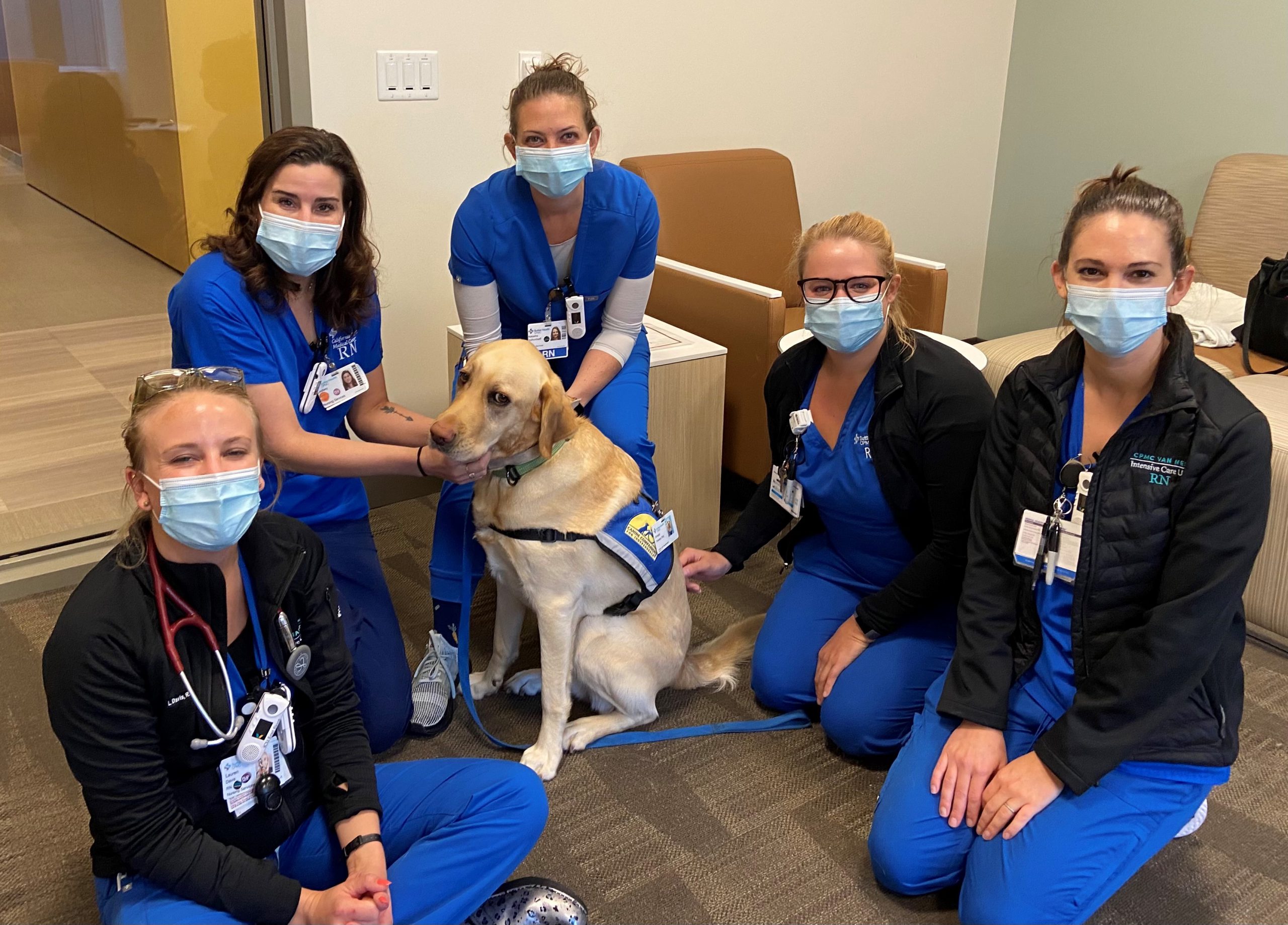 “Did someone say there’s a dog on the unit?”

Three-year-old Omega is no ordinary Labrador Golden Retriever Mix. He’s an expertly trained facility dog with Canine Companions® and his moments of joy are helping more than just CPMC patients. His four-legged presence is also a bright spot for staff.

Omega spends his days on CPMC’s Van Ness campus pediatric unit. His job? To comfort the hospital’s youngest patients. This can mean anything from a visit with a patient in their hospital room to serving as a friendly distraction during a scary procedure. Time with Omega can even serve as a motivator for patients who need to conquer a tough treatment. 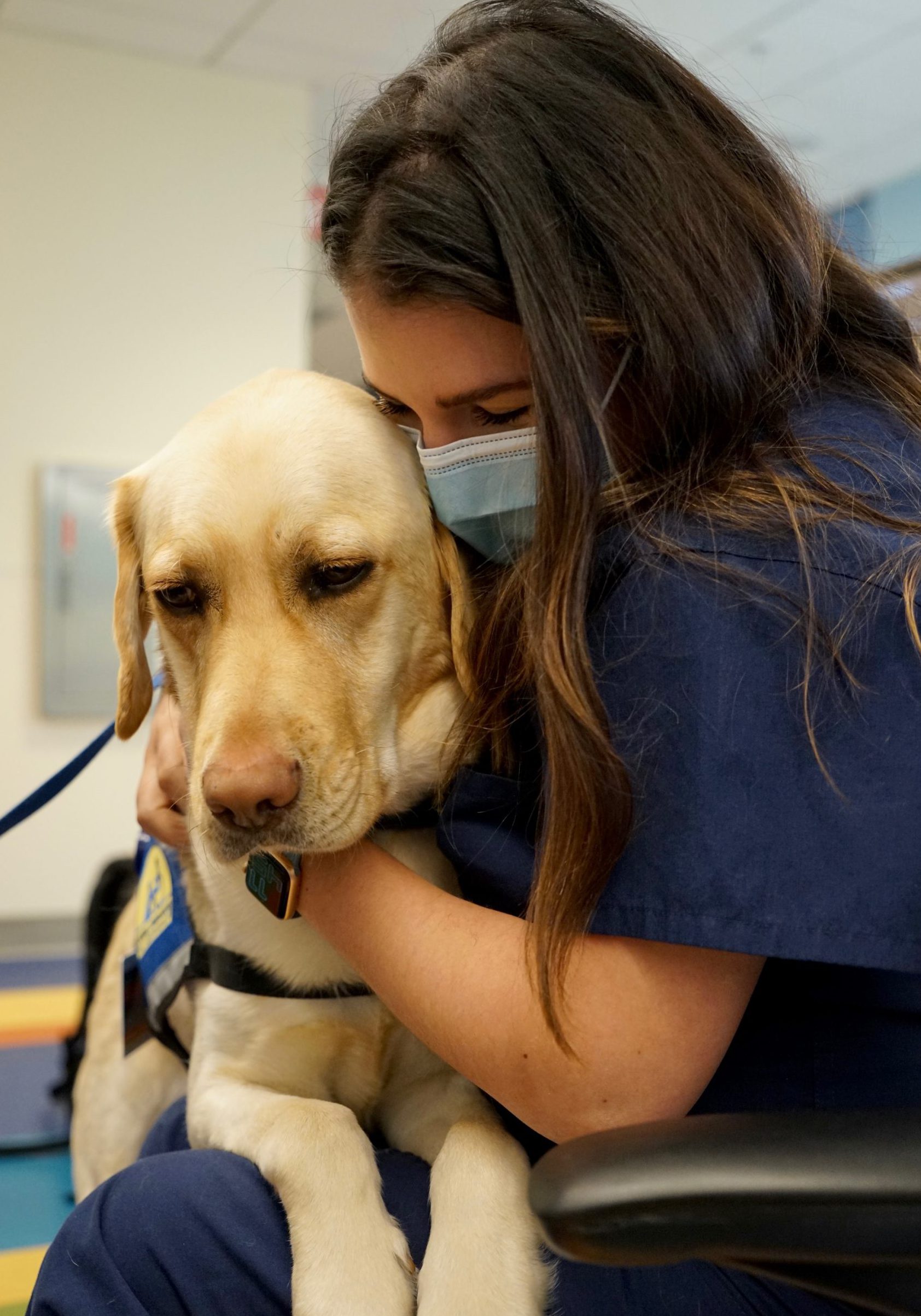 Omega is cuddled by a nurse at CPMC Van Ness Campus hospital.

“We often meet doctors and nurses getting on the elevator from the ICU and they’ll take 10 seconds to pet him and say hi. They always say to me, ‘You have no idea how much I needed this today.’”

Chad Ortega, clinical nursing manager at CPMC, agrees. “We’re thrilled to have a facility dog here at CPMC and I’m glad he’s making a positive impact on everyone,” he said.

Ortega says he’s heard from staff how much interactions with Omega mean.

Being with an animal makes you feel good, says Denault.

According to research, petting and playing with an animal for a little as 10 minutes can increase oxytocin in the body, which brings feelings of happiness and empathy. It also lowers the heart rate, decreases blood pressure and reduces cortisol, a stress hormone.

Omega isn’t the first full-time canine staffer helping to brighten the hospital stays of children, their families and caregivers. The first facility dog at a children’s hospital in the nation was Hazel, who began working at Sutter Medical Center, Sacramento Children’s Center in 2003. The Sacramento pediatric facility now has four full-time Canine Companion-trained dogs. (See them at work in this video.) And, just before Hazel, Sutter Health and Canine Companions collaborated in 2002, when a facility dog began working with patients at Sutter’s Alta Bates Summit Regional Acute Rehabilitation Center.

Today, Sutter employs trained pups assisting pediatric and rehab patients at several of its facilities throughout Northern California. These facility dogs all have their own ID badges and “business cards” to tell patients a bit about them. In addition, the integrated health network has volunteer-led pet visiting programs for adult hospital patients that include dogs, cats and even miniature horses. They, too, put smiles on the faces of nurses and physicians as well as patients.

“I see our ICU nurses working so hard,” said Denault. “I’m glad a few minutes with Omega can support all that they do on a daily basis.” 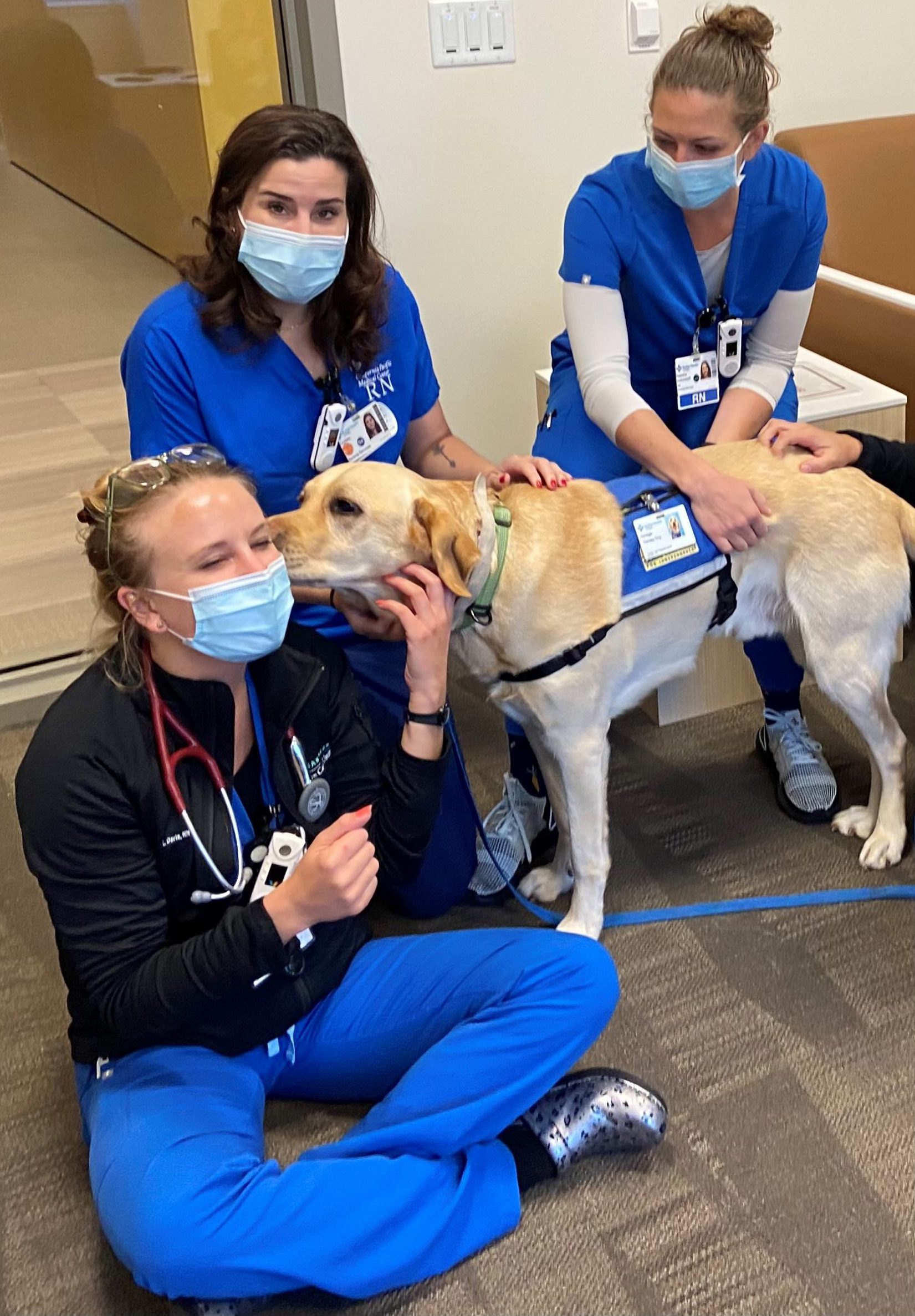 An ICU nurse gets a kiss from Omega.