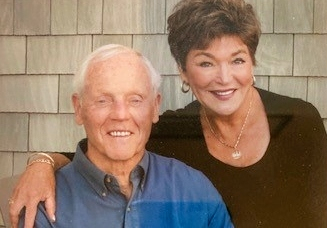 When Bob Warren, 87, of Davis, Calif., was experiencing a sudden loss of speech, his wife feared he was having a stroke and called their family doctor. He was taken to the emergency department at Sutter Davis Hospital, where tests revealed a surprising diagnosis: Warren had lung cancer. He occasionally smoked in his youth, but hadn’t for years.

“The diagnosis was shocking, but I quickly accepted the news and was eager to move forward with a treatment plan,” Warren said. “We try to stay on top of medical news and information, so I realize catching lung cancer early can help provide the best chance for cure.”

The X-ray taken at Sutter Davis showed a “blurry spot” on the top of his right lung: a tumor visible by CT scan had begun spreading to other parts of the lung. It had spread to too many lymph nodes to be removed by surgery. The diagnosis was stage 3, non-small cell lung cancer, or NSCLC.

Dr. Deepti Behl, medical oncologist and medical director of the Sutter Institute for Medical Research, says the combination had demonstrated “early, promising findings” in the study offered to Warren. Dr. Behl helped him understand and complete each phase of the treatment.

“I saw joining the study as an opportunity to advance research that might cure my type of cancer and help other people diagnosed with the illness,” says Warren.

Immunotherapy with monoclonal antibodies, such as durvalumab, may help the body’s immune system attack certain types of cancer, and may interfere with the ability of tumor cells to grow and spread.

The ECOG-ACRIN EA5181 study is being done to see if adding durvalumab to standard chemotherapy and radiation followed by additional durvalumab can extend study participants’ lives and prevent the tumor from coming back.

As part of the Phase 3 clinical trial, Warren received five courses of radiation treatment and chemotherapy infusions every week for six weeks, after which he received durvalumab. Dr. Behl and the study team monitored his health and the effect of the investigational combination therapy in shrinking his tumor.

A PET scan, used to help determine where and whether cancer has spread, done in July 2022 showed the tumor had significantly shrunk. Warren’s most recent PET scan was cancer-free, and he will be monitored over the next several years to help him remain healthy.

“At Sutter we take pride in offering the most evidence-based, innovative and personalized therapies for each of our patients,” says Dr. Behl. “We are proud to have participated in many pivotal trials that have redefined standards of care. Our clinical trials bring the latest that medical science has to offer to our patients, right where they live.”

For Warren, this means a way to “pay it forward” by contributing to medical research today for tomorrow’s best medicines. And, it is extending his life.

“The top-quality, compassionate care offered at Sutter was a true blessing,” he says.

According to the American Cancer Society, lung cancer is the leading cause of cancer death among men and women — making up nearly 25% of all cancer deaths. Screenings can be an effective first line of defense when it comes to those at risk for lung cancer. For screening, contact your primary-care physician.