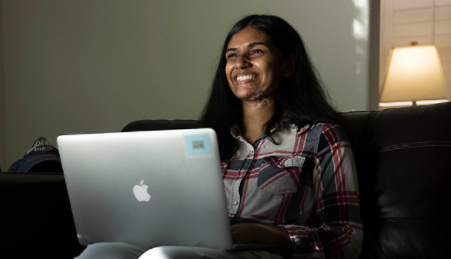 Speaking before hundreds of people at an FDA-sponsored public meeting on drug development for vitiligo, a condition that causes loss of skin color in patches on the face and elsewhere, a shy 16-year-old found her voice.

“I used to swim, bike, skateboard, play the violin at concerts and manage track and field at my school,” Priyanka Francis told the panel. But when the skin discoloration on her chin, neck and shoulders became more obvious at age 12 she withdrew from most of those activities. “At a time when I was ready to explore the world, learn new things and have fun, the vitiligo chipped away at my morale, self-esteem and quality of life.”

Francis and her family searched for effective treatment for years, but like many vitiligo patients, saw little improvement in her condition. “We were on a wild goose chase to figure out what was wrong,” Francis shares. Initially diagnosed with pityriasis alba, it wasn’t until Francis started going to a dermatologist that she was correctly diagnosed with vitiligo. She then began using topical creams and narrow-band UBV phototherapy, but found progress slow.

That is, until she began cutting-edge skin graft treatments with Amit G. Pandya, M.D.

Dr. Pandya is one of very few physicians nationwide who perform various skin grafting procedures to treat vitiligo. “I know it can be difficult for patients to find doctors who specialize in vitiligo, and many travel very long distances for skin grafts,” Dr. Pandya says. “I’m delighted to bring these techniques for treating pigmentary disorders to Northern California.”

Vitiligo affects just under 1% of the U.S. population, approximately 3 million people of all races. There are no biomarkers for the disease, and its unpredictable nature causes patients to constantly fear new spots appearing. Though not life threatening, vitiligo often has a deep psychological impact, sometimes leading to depression, anxiety and even suicide in certain cultures.

“Half of my patients are of South Asian descent, and like other racial and ethnic groups, South Asians face tremendous stress from this disease.”

Dr. Pandya is trained to perform three types of skin transplants; each type first requires that a patient’s vitiligo spots have been stable for more than a year. The first of the three grafting procedures—and the treatment Francis received—is called punch grafting or mini-grafting. It involves grafting small circular pieces of normal skin into areas of vitiligo. As the patchwork of grafted skin grows in it eventually covers the impacted (non-pigmented) area. 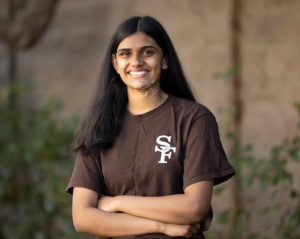 “Initially, my chin was completely white, but after the mini-graft started to fill in, the area is now 80% to 90% back to normal,” Francis reports.

Dr. Pandya is now in the process of acquiring the equipment needed for a second grafting procedure, called a blister graft. This technique uses the top layer of a blister created on normal skin and grafts it onto the target area. The third technique, which Dr. Pandya also hopes to offer soon, is non-cultured epidermal suspension grafting (NCES). This procedure involves separating epidermal cells from the blister top, placing them in a solution, and applying the solution to the target area. With NCES, each small blister can be expanded to cover an area five times larger.

Having found an effective solution for her vitiligo, Francis now works to support other patients with vitiligo and raise awareness for treatment options. Along with speaking at the recent FDA meeting, she started a blog to share her experience and build community. She and her mother, Vimala Francis, participated at a World Vitiligo Day event with Dr. Pandya in June 2021 and Francis is active in the Purple Patch Teens Group, part of VIT Friends, a group that supports vitiligo patients. 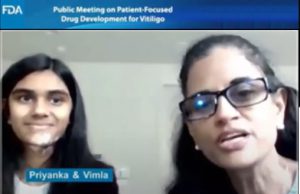 Perhaps it’s no surprise that Francis aspires to be a pediatric dermatologist when she grows up. She has always enjoyed working with children, through volunteering and teaching English as a second language. She also gathered other socially conscious students to start a club at her high school that highlights global issues in teen-friendly, digestible formats. As Francis feels more in control of her disease and her self-confidence is on the rise.

“Psychologically, it is so encouraging to see this kind of progress,” says Francis of her treatment. “Going through the pandemic and struggling with anxiety and depression, I realized that the root of my self-doubt stemmed from the onset of vitiligo, so I want to help others with this condition.”